skip to main | skip to sidebar

The Advertiser of 7th August also reported that strict new limits on the amount of berley that shark cage diving operators at Port Lincoln, South Australia can use to attract sharks have been reduced. The two operators using berley are now restricted to 120kg of berley and teaser baits per trip. The amount of berley that they can use will be further reduced next year, when they can only use 100kg per day (or trip?). A further restriction placed on the operators concerns when a shark either grabs a teaser bait or crashes into the cage while trying to eat the bait, all berleying activity must cease for 15 minutes. These new restrictions aim to reduce the amount of berley being used and to stop sharks being fed during such activity.
Posted by Steve Reynolds at 3:31 AM No comments:


Media Release - 1 May 2017 - Following their presentation at the Senate inquiry into shark mitigation and deterrent measures last week, Shark Shield, manufacturers of the world’s only scientifically proven and independently tested electrical shark deterrent, has today announced the pre-production release of a long-range version of its technology. The new Shark Shield Ocean Guardian is based on 20 years of research and utilizes a patented Metamaterial Electromagnetic Transducer, with expectations of repelling sharks within a 100-meter diameter of each unit installed. Lindsay Lyon, Shark Shield CEO says, “The Ocean Guardian has been many years in the making and has come about through a partnership with leading physicists and biologists. We have been able to produce a long-range shark deterrent solution to not only protect beach goers but significantly reduce the environmental impacts caused by using shark nets, drum lines and culling.” The new transducer form is based on technology used to treat patients in the medical field including, oncology, urology and other chronic diseases, with clinical studies demonstrating that the electromagnetic field does not affect the health of humans or ocean life, such as sharks or dolphins. “Sharks have small short range electrical receptors in their snouts used for finding food. Shark Shield’s electromagnetic field causes unbearable spasms in these sensitive sensors, which turn sharks away, this has been well proven over the past twenty years. The Ocean Guardian leverages this weakness in sharks to not only deter them, but in the long run we hope to teach them to stay away from beaches protected by Shark Shield,” says Lyon. “Classical conditioning, also known as Pavlovianor respondent conditioning, refers to a learning procedure in which a biologically potent stimulus, such as food, is paired with a previously neutral stimulus, such as long term use of Shark Shield Ocean Guardian. With our Ocean Guardian in place, over time sharks will learn to not enter the area and over time will avoid the area due to the unpleasant effects of the electromagnetic field,” adds Lyon.”


Below are some facts about the Shark Shield Ocean Guardian:


“The Ocean Guardian transducer utilizes Metamaterials, or sometimes also known as Artificial Electromagnetic Materials, these are new materials, which have anomalous interaction with electromagnetic fields.


The engineering of these unique materials results in physical properties not otherwise obtainable with natural materials enabling advanced improvements in the performance of conventional electromagnetic devices.


Starting from these concepts and theoretical background of artificial electromagnetic materials and metamaterials, Shark Shield has developed a transducer with significantly improved losses.


The creation of this negative index material has resulted in a reduction of transducer losses in producing electromagnetic fields, this innovation has led to the new long range technology in the new Shark Shield Ocean Guardian


(Source: https://prwire.com.au/print/shark-shield-announces-breakthrough-long-range-shark-deterrent)
Posted by Steve Reynolds at 11:46 PM No comments:

The SDFSA's ScuBAR at 6pm on Friday 10th November features guest speakers Andrew Fox (Life in the shark lane) and Simon Bryars (Blue Devils and Harlequins). All ScuBARs are held at the Rob Roy Hotel in Halifax St, Adelaide, South Australia.
Posted by Steve Reynolds at 11:42 PM No comments:

Sorry folks, it's been a while since my last post here. One year in fact. I just wanted to draw your attention to my article titled "Jean and “Kitty” Whyte (Daughter of shark attack victim died exactly 77 years to the day later)".

“Kitty” Whyte was SA’s first known shark attack victim. In March 1926, she had been giving swimming lessons to some children at Brighton jetty when she was attacked by a 3-4m shark She was subsequently rescued by two men in a boat, but she apparently died on the beach.  I previously documented Kitty’s death in two past MLSSA Newsletter issues (Nov. 2011 and Feb. 2012). My two-part report regarding Kitty’s death gave the date of her death as 17th March 1926. I now see that most reports give the date as 18th March, rather than 17th March.
My reason for bringing this matter up once more is because Kitty’s daughter, Jean Whyte died in Melbourne on 18th March 2003. This is said to be “77 years to the day” that Kitty herself died in 1926. This must be particularly sad for any remaining family members, with both mother and daughter having died on the same date.
Further details can be found in the complete article at http://mlssa.org.au/2017/08/08/jean-and-kitty-whyte-daughter-of-shark-attack-victim-died-exactly-77-years-to-the-day-later/ . 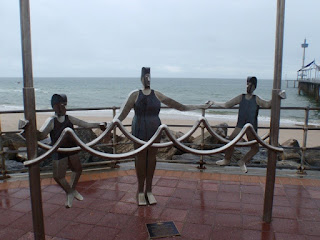 Posted by Steve Reynolds at 11:32 PM No comments:

Shark expert, Dr Rachel Robbins is giving a presentation at the Adelaide Zoo, Frome Rd, Adelaide on Sunday 16th October 2016 from 8:45 - 11 am. Join Rachel to explore the secretive lives of sharks. Dr Robbins worked with great white sharks off the coast of South Australia for 15 years and studied them for her PhD. Following the presentation, you will be invited to enjoy bubbly and pancakes in the Sir Thomas Elder Rotunda. Bookings Aare necessary and close Friday 7th October 2016. Admission is as follows: -


Life members are entitled to bring 1 guest at the members’ price.


Visit http://www.adelaidezoo.com.au/event/great-whites-and-great-bites/?mc_cid=9fb9fb0944&mc_eid=cfc85e2901 for more details.
Posted by Steve Reynolds at 4:07 AM No comments:

Steve Reynolds
A scuba diver & President for the Marine Life Society of SA. Involved with the Scuba Divers Federation of SA since the mid-1980s. The Federation's Secretary from 2001-2019. A GIRT scientific diver. A founder of Dragon Search. Australian scuba diving rep for Redmap.